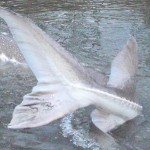 The majority of white sturgeon populations in British Columbia are listed under the federal species at risk act and are open to angling. Since the populations in the lower and middle Fraser river are relatively healthy, they are able to support exciting world class fishery. How ever, these populations are still vulnerable to impacts from angling, habitat destruction, pollution and salmon net fisheries, and they are still provincially and nationally designated as endangered. In addition to being endangered, white sturgeon mature after 17 to 20 years and can live for more then a 100 years, so impacts or injuries can be long lasting. As such all sturgeon angling in the province is catch and release only and will be more strictly managed in the future. Indications are that catch and release sturgeon can be a low impact activity. However, to minimize harm to fish, extra care and attention must be taken to ensure there health and survival, and to maintain this treasure fishery. Anglers should abide by the following capture and handling practices: