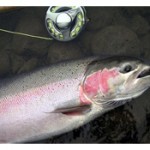 Steelhead Fishing – The famous hooked snout of the Steelhead “Humpback” marks it off as unique from all the rest.  The Vedder and Chehalis rivers in the mountain localities adjacent to Chilliwack are home to the excitement.  In the picturesque mountainscape of Chilliwack, British Columbia in the beautiful country of Canada, from late December until the end of May, run the elusive Steelhead.  These rivers are monitored and protected by the local hatcheries which help facilitate the magnificent Salmon runs we are accustomed to.  The beauty of the Steelhead matched with the quality of its fight makes this fish – a fish that weighs up to 25lbs – have made them one of the most popular favourites for local anglers.  Our conservation efforts in tandem with B.C. hatcheries have helped sustain this as the Fraser Valley claims home to a fantastic Steelhead hatchery program. The winter is nothing to fear: the Valley boasts one of the mildest in Canada.  Temperate enough and as scenic as ever, Chad’s Fishing Charter’s offers walk and wade packages from January 1 to May 31.  Don’t hesitate to make your dream a reality, and book with us today!

The back in sea-run specimens is dark, metallic blue with the sides and underparts silvery to white below the lateral line. The back, dorsal, adipose, and caudal fins have bold dark spots. Those on the caudal are usually in radiating rows. The adipose is bordered either by a black continuous margin or by several black spots. The dorsal and pelvic fins are often with white or orange leading edges. Usually no red hyoid streaks are seen on the underside of the jaw. In breeding males, there is a continuous deep pink to red band along each side of the body that is more vivid than in females.

The body is elongate, depth about 4 into standard length, and moderately compressed. Head length is short, about 3.8 into standard length. Mouth is terminal, with the maxillary extending to point below, or slightly behind the posterior margin of the eye (especially in males). Snout is blunt, and lips are fleshy. Teeth are small, conical shaped, and well developed. Teeth are located on both jaws, on the head and shaft of the vomer, palatines, and front of the tongue (no teeth on back of the tongue).
The interorbital space is convex and smooth, and its width about 2.9 into length of the head. Eye diameter is about 5.2 into head length. Gill membranes are free of each other and of the isthmus. Branchiostegals range from 10 to 15. Caudal peduncle is stout and moderately compressed, its least depth is about 8.5 into standard length. Pyloric caecae range from 27-80. On the first gill arch are 17 to 21 gill rakers. Scales are cycloid with 115 to 161 scales located above the lateral line.
Adipose fin is small-based and fleshy. The number of rays in each of the fins are: dorsal, 10-12; anal, 8-12; pectorals, about 15; and, pelvics about 10 (each of the abdominal fins have a free tipped fleshy appendage above its insertion). The caudal fin is shallowly forked.

There are no striking external differences between sexes. However, spawning males have a more vivid red lateral band as compared with females. Males often have a more pointed or hooked snout.