All About BC & Sturgeon in North America 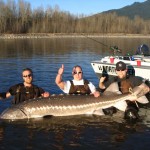 BC Sturgeons are native to North American and Asian subtropical and sub-Arctic rivers, lakes and coastlines. They are anadromous toothless bottom feeders who eat a variety of dead fish and mammals. They enjoy small fish for an appetizer, swallow whole salmon for lunch, and can feast on baby seals. Sturgeons spawn upstream much like salmon do, and feed in river deltas at the mouths of still water lakes by built up sediments. These monsters can also venture out to the ocean, but they usually prefer to sta in lakes and rivers.

Sturgeons are one of the oldest bony fish in existence. Sturgeons date back to 200 million years old, making Canada their home, and making British Columbia known for some of the best sturgeon fishing in the world.

Sturgeons are not only as old as dinosaurs, but they are practically the same size. Sturgeons are among one of the largest species of fresh water fish, ranging from 7-12 feet in length. Some species can grow up to 18 feet long and several hundred pounds!

Not only are sturgeons large and valuable, they are slowly becoming destinct. They are very slow growing and they mature very late in life. Because of their slow growth, they are more vulnerable to other threats, such as pollution and habitat reduction and erosion over time. Sturgeons are more endangered than any other species and they are highly at risk of extinction due to overfishing, pollution, and habitat destruction.

Because sturgeons are declining in numbers, they are increasing in value. Certain species of Sturgeons are treasured for their ovarian eggs. The eggs, which is a luxury food also known as caviar, are harvested, making the sturgeon the most valuable of all harvested fish.

In the Fraser Valley and Lower Mainland area of British Columbia, White Sturgeons can be found in the Fraser River, Harrison River, and Harrison Lake. Sturgeon fishing in BC begins in May to June. You can find these creatures in deep, slow moving pools during the day and in shallow areas at night when they are feeding. To catch a sturgeon you should use a bell sinker and a hook that will hover near at the bottom of the lake or river. Sturgeons are not fussy eaters so a bunch of worms will do the trick. Cheese, salmon eggs, snails, clams, and leeches also work wonders, but make sure your sinker is at the bottom and the bait can move about so the sturgeons won’t be able to resist the bite. 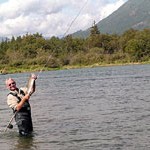 The following list provides some helpful hints for your fishing experience on the local rivers, namely the Fraser, Harrison and Chilliwack/Vedder Rivers. We urge you all to assist in efforts to help look after this valuable resource by respecting the river, the fish and your fellow angler.

NOTE: Total of all the above is 4 per day. There is a 2 day possession limit of 8.

NOTE: There is a conservation concern for Cultus Lake Sockeye and every effort must be made to avoid catching this species.

IMPORTANT: Catch limits are subject to change and Fishery Notices override any of the above.